Welcome to GhostBSD! GhostBSD is a FreeBSD based operating system for Intel (x86 and Itanium®) and AMD64 computers. The project started by Eric Turgeon in Moncton NB Canada. Since 2009 GhostBSD have evolves from a live CD only to installable system.

GhostBSD is essentially a customized installation of FreeBSD. Since the underlying FreeBSD system has been kept intact, you have a fully functional FreeBSD system under the hood. GhostBSD provides a graphical installer, a graphical package management, and work to integrate more graphical utilities that make GhostBSD suitable for desktop use. As a user of GhostBSD, you don’t have to worry about configuring a FreeBSD system for desktop use. Instead you can simply install and start using it. Ghostbsd try to meets the needs of the beginner to the advanced user. Also GhostBSD aimed to be an introduction for Linux user to FreeBSD without having to do configuration. Still lots of work to do. But time to time all will progress.

A Brief History of GhostBSD[edit]

The GhostBSD Project had its beginnings in the early part of 2009; the idea of project founders Eric Turgeon and Francois Toussaint. Our original goal was to produce a secure, installable FreeBSD Gnome Live CD system. A major goal is to help new users adapt to FreeBSD. Francois Toussain and Eric Turgeon had a number of problems including the lack of knowledge of building a BSD system and on top of that, programming it. Francois has since backed out of the project. Some of you may remember all the posts that Eric made in FreeBSD forums.

Eric Turgeon had found 2 projects that would help; finstall and freesbie. Finstall is Live CD but had an outdated installer. The toolkit to build finstall was lacking good options to configure the installer. Freesbie was outdated but workable and with good structure Eric Turgeon adopted that tool. Eric studied how to build FreeBSD with Freesbie also thought of adopting Gnome for the main GUI and learning to configure Gnome.

Eric did not take long to decide to release a buggy version of his work to see the reaction on FreeBSD Forum. The feedback from users was pretty good. For a while Eric worked on a better system, updating packages and working with Gnome. He add released the first 1.0 BETA in November 10th, 2009. Once it became clear that the project was on the road, the real work started to perhaps try to get the project to a reality.

Since 1.5 GhostBSD was installable from text base installer. In GhostBSD 2.5 the first Graphical Installer for GhostBSD has made it to the release. More improvements followed with GhostBSD 3.0 and 3.5, including adding more of his own custom applications and modifications to the system.

The goals of the GhostBSD Project are to provide two basic features: An already configured GTK Desktop with software and a FreeBSD based system.

Along with that, our goals are these:

After reading this chapter, you will know:

At a bare minimum, you need to have the following computer hardware in order to install GhostBSD.

GhostBSD should install on any system containing a 32-bit(i386) or 64-bit(amd64) processor. The amd64 name refer to 64-bit processor and does not refer to the processor manufactured by AMD. The FreeBSD Hardware Notes list the i386 and amd64 processors known to work.

GhostBSD uses X.org drivers for graphics support. X.org supports many video cards. If you want to use 3D acceleration, NVIDIA is currently the best supported as there is a native driver for FreeBSD. 3D acceleration may work on some Intel card.

3D acceleration will not work on ATI or Radeon cards until FreeBSD completes its TTM work (possibly for 9.2). You can still use these cards, but you will have to choose the 2D driver, and if that does not work, you will need to resort to using the Vesa driver.

Most hardware works with GhostBSD, it is possible that you'll run across a piece of hardware that does not. If you do, please report the problem so that it can be addressed by the developers. It should be remembered that GhostBSD is really FreeBSD, meaning that any hardware that works on FreeBSD will work on GhostBSD. You before installing GhostBSD, you can check the FreeBSD 9.0 Hardware Notes.

GhostBSD support some of wireless networking cards. You can check if your card has a FreeBSD driver. If it does, it should "just work". Currently there are some missing wireless drivers, typically in the Broadcom and newer Realtek series.

Back Up Your Data[edit]

Back up all important data on the target computer where GhostBSD will be installed. The GhostBSD installer will not ask before making changes to the disk, but once the process has started it cannot be undone.

GhostBSD is based on FreeBSD. Although the FreeBSD Project strives to ensure that each release of FreeBSD is as stable as possible, bugs occasionally creep into the process. On very rare occasions those bugs affect the installation process. As these problems are discovered and fixed, they are noted in the FreeBSD Errata on the FreeBSD web site. Check the errata before installing to make sure that there are no problems that might affect the installation.

The installation system for GhostBSD can be downloaded for free. GhostBSD is available in .iso(CD DVD) or .img(USB stick and flash drive) file extension. Copies of GhostBSD installation media are available at the GhostBSD Download page.

Creating a bootable Memory Stick in FreeBSD, Trident, or GhostBSD.[edit]

The memory stick image has a .iso extension. The .iso file is not a regular file. It is an image of the complete contents of the memory stick. It cannot simply be copied like a regular file, but must be written directly to the target device with dd(1):

The memory stick image has an .iso extension. The .iso file is not a regular file. It is an image of the complete contents of the memory stick. It cannot simply be copied like a regular file, but must be written directly to the target device with dd(1):

Windows Image Writer for Windows is a free application that can correctly write an image file to a memory stick. Download it and extract it.

If you prepared a “bootable” USB stick, then plug in your USB stick before turning on the computer.

If you are booting from CDROM, then you will need to turn on the computer, and insert the CDROM at the first opportunity. Introducing bsdinstall You can boot by:

If your computer starts up as normal loading your existing operating system, then either:

GhostBSD will start to boot. If you are booting from CDROM you will see black screen with similar text to this:

The GhostBSD boot loader is displayed: 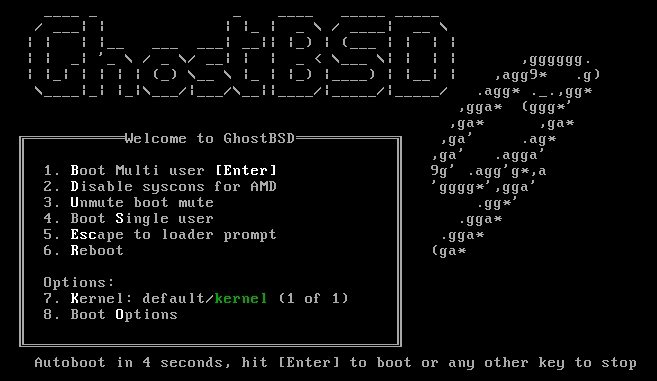 Once GhostBSD is booted you should see a screen like this:

GBI is a GTK graphical BSD installer program written by Eric Turgeon and introduced in 2011 for GhostBSD 2.5. GBI use the pc-sysinstall back-end developed by Kris More of PC-BSD.

Select the language you will like to use after the installation. If is not show in selection don't worry you can change it can be selected at the first boot to the GDM login.

The layout option is your country specific keyboard layout. Its the mostly common option to select. For the option But if you have standard keyboard you do not need to select that option.

The variant option is your type of keyboard. This option give you the opportunity to select Dvorak, Qwerty and more. But most of the time you will not need to select one option.

Setting the time zone for your machine will allow it to automatically correct for any regional time changes and perform other time zone related functions properly.

Select the continent you live in and chose your City.

If multiple disks are connected, choose the one where GhostBSD is to be installed.

The entire disk can be allocated to GhostBSD, or just a portion of it. If "Use Entire Disk" is chosen, a general partition layout filling the whole disk is created. Selecting "Auto label Partition" you can creates a partition slice without labeling it. By Selecting "Customize Disk Partition" is the advanced user. The is able to create custom partition slice and create multiple label.

BSD Boot Loader GhostBSD can be install with is boot loader or not. If you dual Boot with GNU/Linux on the same Disk> You should use Your Gnu/Linux Grub. We recommend to use GhostBSD Boot Loader with MS Windows.

When using this option it use all the space of the hard drive selected.